How to model a building

Buildings are structures than are builded, and also decay with time if no properly maintained.
A building construction can have as many visual steps as desired. They also can have as many visual decay steps as desired. But it’s recommended to use as few as possible to have a nice representation.
To incorporate to the visual building steps some elements that help to give the impression of the work being done is a nice touch and recommended -like some material to be used on the ground, or temporal support structures, etc…

It’s recommended to use the same number of steps for building and decay.
The same representation of the complete build structure should be used as the last step for build and decay.

The apparent material incorporated or remaining for the equivalent step of build and decay should be visually the same or close enough.
The appearance of usability should exist from 75% of building process or less than 75% decay. 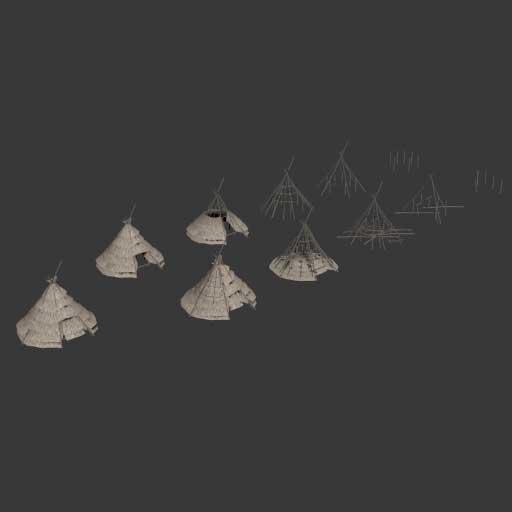 I’m wondering if the game does/will support buildings that do not contain animations per se, but they contain pathing, where people could walk over them, such as bridges or the balcony of a building?

Not at this point

Ah, alright. I thought I would bring it up. Now that I really think about it, another example would be an open temple with a raised floor that people would would perform religious ceremonies on/at.

Is there a program that we can use to start modeling buildings for the game? Any recommendation?

What exactly does the game do with these different C N T and O textures, with a building?

I’ve messed around with FreeCAD a little bit, trying to make a simple bracket to print with a 3D printer. That pretty much sums up my 3D modeling experience.

You can use any 3d software that support fbx format export.

How to model Mods

GEOMETRY AC uses meters as unit. So in your 3D package be sure to model with this consideration. No scales or other transformation will recovered from 3d models. Objects must be modeled at its proper size and orientation in local space. Vertex normals AC supports custom normals, so feel free to edit them to improve the look of your models as needed: http://wiki.polycount.com/wiki/Foliage Vertex color Information AC supports 4 channels of vertex color that can hold several types of i…