Good thought. I am in doubt whether cave painting was still practiced in the Neolithic. Since times our experts should be asked. Could I imagine that there were drawings on leather …?

For the sake of the game. I think that perhaps something could be arranged, I can’t imagine that irrigation was done as a oral tradition. Stone tools and weapons could be done as stories of warriors. How Joe Bob the Great tied stone to wood and defeated his enemies. Tamed the woods.

Things of daily life by intertwining generations on an oral basis. Could imagine, that there were maps of the known areas, landmarks and peculiarities.

I can’t imagine that irrigation was done as a oral tradition.

I leave aside Western European climate, where irrigation is not a necessity. So, just focusing on an arid climate like Egypt, Mesopotamia, Iran, the Mediterranean areas, etc.:

Egypt’s a peculiar case, where the annual flooding may move the marks at the edge of each field. Then there two simplified steps may be reproduced:

Either case, it may be delayed a bit until the Middle East or Bronze Age DLCs are being worked on.

Great maps on the cave walls and prized possessions in the cave. Trophy kills and war trophies placed in the throne room of the chief. A game mechanic could be that the more war trophies you have when you host peace, politics or war rallis. You get bonuses vs whatever.

Great maps on the cave walls and prized possessions in the cave. Trophy kills and war trophies placed in the throne room of the chief. A game mechanic could be that the more war trophies you have when you host peace, politics or war rallis. You get bonuses vs whatever.

Let us wait until we can define the role and essence of the player. Is still too early - unfortunately.

Just a thought. Hopefully someone at uncasual games is writing at least some of our ideas down. If not implementing what can be useful.

But, I think so. Probably all the walls of her office are full of post it’s 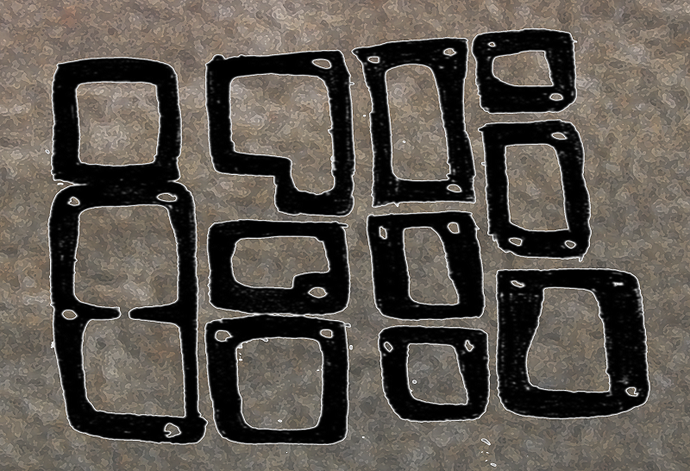 To be clear: This is a reproduction I made, not a real art piece. It mimics the Catalhoyuk pieces, found in the link below.

Caves, no… but buildings, yes!
Neolithic mudbrick buildings had many murals which resemble cave art, just not in a cave.

Gives a video about Val Camonica with rock drawings of the Celts, unfortunately only in German

i dunno about the paintings from France, but the ones here in Norway dates back from early stone age until late iron age, not all in caves it, just on the bedrock here and there in some places

I believe you will have a hard time supporting the claim that irrigation requires a written language. It would have been passed down by oral as well as hands on learning. Generally, performed by the segment of the population that did not read or write.

It depends what you mean with “irrigation”: one lone ditch to provide water for one family in a temperate climate, or a wide and extended system of canals and reservoirs allowing a lot of villages and towns of several thousands of inhabitants to live of their crops in an arid climatic zone?

Well, again your going to have a hard time supporting that as irrigation systems still in use to this day pre-date written languages. writing in itself is going to be a tough argument for neolithic period.

Script, I would be unsure now. But since larger projects are already about advanced engineering performance, there should have been drawings or models. On the other hand, we do not know which first man has devised and realized the first irrigation system. Many others have looked at it and understood the principle (?). It had to be maintained, learning by doing so. Children certainly played with it (little ships), could become a kind of general knowledge…

It depends what you mean with “irrigation”