I don’t mean full-on genetics when I mention this. What I trying to get on is the question of good and bad traits in villagers.

This creates the representation of strong and weak villagers, smart and stupid, lazy and industrious. How the developers model this is a question. Though starting points can include the simplistic S.P.EC.I.AL. model from Fallout.

The output of this system means that over a normalised distribution villagers are for the most part in the middle with some folks being on the tail ends of the distribution (incredibly high constitution compared to permanently sickly and likely to die easily). On the whole though, those villagers with weak traits will probably die off whilst those with strong traits will survive and pass on their genes.

Every time a child is born their genetic roll of the dice will determine this based on their parents genetic weighting.

This can thus lead to an attraction based mechanic, where villagers with higher attribute scores are more likely to partner with another villager and produce offspring.

Now how you embed code that works in AC is another question.

This is a great idea. Id say changeable races of tribes, but then youd have to have a spawning stage outside of where its set now. This is a neolithic european game so there are only whites. I do like the trait passing down idea. Genetics are a wonderful thing :D.

Does that have any affect on tools we can make? Like my hunter uses a rock until he figures out how to make a spear, but he still has a way to go before he’s smart enough to make a bow & some arrows?
& would that be the same with buildings as well?

Something that could be added is consanguinity : if two people are too close genetically speaking the offspring would have an extra chance to be weak. It will limit the superkids fatory (which is not very realistic) and encourage assimation of new people in the tribe (or raid for kidnapping)

My people believed that in order to have the largest/strongest Mana (spiritual energy) possible it was about bloodlines, & it was common practice to be with cousins (brother & sister wasn’t as common). My people were very smart with a muscular physique, & some say supernaturally strong.
Those born with malformed body parts or even large ominous birthmarks were killed (i believe there were other people, maybe Sparta, who did this as well. But maybe not between close relatives) This type of “culling” helped to strengthen our people. & this type of “selective breeding” is why we have different types of races, dogs, birds, etc.

When Capt. Cook first stumbled upon Hawai’i & saw my people, Kanaka, in his journal he wrote that he has never seen a finer specimen of man. & that’s coming from an “explorer” who has traveled the world & seen many different tribes of people.

My auntie told me of a story about her grandfather, my great grand uncle, who was over 7ft/2.5m (this was shortly after contact with white people/“america”) He was 3 miles from the house & forgot the keys to one of the gates surrounding the fields, but it was to much of an effort to go back for it. So he lifted his horse up & over the fence & placed it down on the other side without much effort & continued on. I asked a few of my family about it (without my aunt around to see if she was playing with me) & i heard the same story from everyone. & it stirred up other times they remembered family doing almost impossible things. Like how that same great grand uncle was training that same horse, & when the horse bite him he knocked it out with a single punch. They had to wait 2 hours for it to wake up so they could continue training

Sorry for ranting, but i felt a little offended & wanted to show that retards & lames are not always the case or the only offspring. 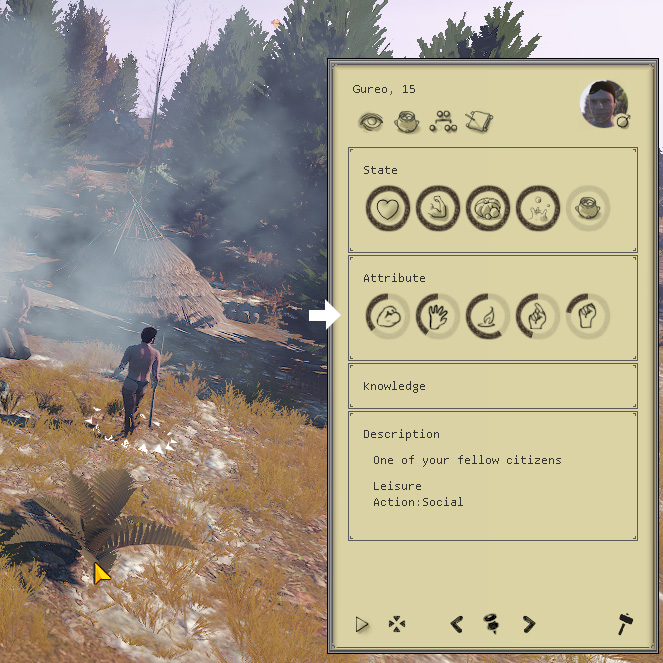 Currently (and subject to change ) characters have this 5 base attributes.
Some of them are inheritable from parents in a simplified genetic way.
Guess what is each one of them?

If i were to guess i would say: strength, skill, will, leadership, respect

If i were to guess i would say: strength, skill, will, leadership, respect

2 of them now.
What would be follow and stay?

I was following the arrow from left to right, so the last 2 on the right respectively. The military uses hand signs, they point where they want someone to go (follow) & they hold up a fist to stop or hold position (stay).
Ok my last guess, from left to right: strength, skill, will/spirit, foraging, hunting

I guess Inteligence is important but that could be covered with skill?
Also awareness /perception is something back then should have.
What about charisma

During the Neolithic, you had many different groups within Europe. LBK was probably the largest, but many other cultures existed. They often had different mitochondrial or Y DNA, so they were probably not all the same “race”.

Interestingly, they would have been significantly darker skin toned than modern day Europeans. 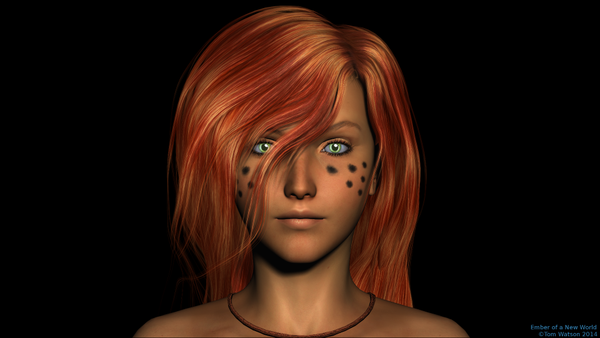 Race and Genetics arent skin deep. having a tanner color than white doesnt mean you’re black or mestizo. Italians and Greeks have darker skin tones than Western and Central Europeans.

She’d still be white. Those features of red hair and the eye color are genetic traits of that ethnicity within the race.

I was speaking more of her haplogroup and haplogroup distribution.
Distributions of people in the Neolithic isn’t the same as today and the “white” might not exactly cover all of Europe (where the game is set). Towards the south, you start to see J2 while in Britain you might find U5 or U5B1a.

Oh ok. Im so used to people trying to argue that somehow everyone in southern europe was black or some crap like that lol. All those beings that would become blacks lived more in central africa and on the lower coast of west africa. That didnt change till long after the Roman Empire fell. North Africa was European for a long time.

Predynastic, Neolithic Egypt was certainly not European, having cultures such as the Neolithic Faiyum.
https://www.ncbi.nlm.nih.gov/pmc/articles/PMC1181965/

Southern Europe is much different from Africa, however. The means to access Africa from Europe during the Neolithic were limited, at best.