First im asking how will you enter in the actual game and if their is going to be some sort of explanation to the start of this tribe, and with what resources will you start.
Also, is the skin color of the caracters going to depend on the spawn area, and is this color going to gradually change dependingon the conditions and area, or is it just going to be a prestablished skin color.
Thanks for your attention.

Not an official answer at all, but while waiting for it: I think I remember from my readings that the genes of hunters-gatherers in Europe are mostly present in Southern European island areas (Corsica and Sardinia).

Then they were progressively replaced by people coming from Middle-East, the first farmers represented by the Linear Pottery Culture (along the Danube, then in Northern Europe until reaching Northern France) and the Cardium Pottery Culture in Mediterranean Europe.

All in all, I think all those people may have looked quite similar, and should be roughly the same as they will be for the upcoming Mesopotamian/Egypt DLCs.

I don’t remember the dates around which they suspect skin color changed, but it was somewhere, if I recall, around the mid Neolithic. There would be a gradual change in the European areas from dark skin to lighter skin, though I can’t recall if they’ve determined the date for that gene expression. This is also why those pictures I keep posting have reasonably dark-skinned people, that I can never get the artist to make them dark enough LOL

With the release of the latest article from the BBC discussing Cheddar Man with his dark skin and blue eyes, we must consider the fact that it is quite likely our Neolithic villagers we’ll bump into late and transitional Mesolithic people in northern areas of Europe. These people will have much darker skin and it seems that blue eyes may have been relatively common.

Cheddar man lived between 5000 and 7000 years before the game is set, but during the Neolithic there were plenty of Mesolithic tribes still living in concert. Skin color for these Mesolithic people will still be dark as it’s changed to becoming lighter seems to have been related to dietary changes as a result of the advent of agriculture. Though there isn’t necessarily evidence for this that I know of, I suspect that transitional Mesolithic to Neolithic people, those who had not directly been overtaken by the wave of Neolithic people moving West but who lived in concert with these people, may have begun the skin lightening process as a result of the use of crops in a limited fashion. That of course is speculation.

I suspect trade and even intermarriage with these Mesolithic people would probably have occurred. I’ve read many articles about this occurring in northern Europe, and I’ll see if I could dig some of them up. 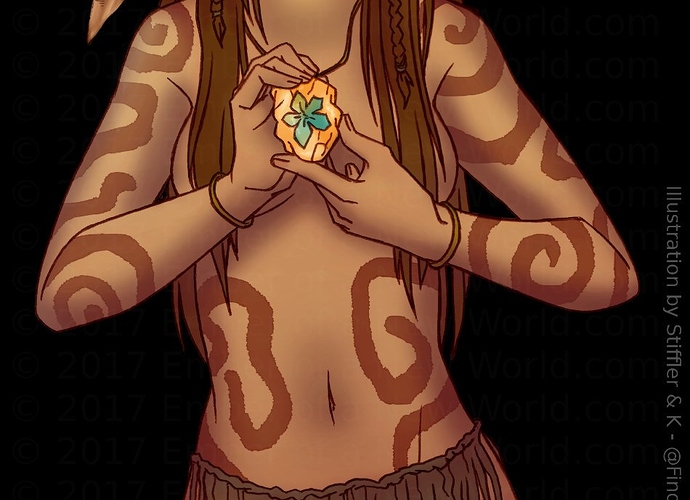 Some thing to note. Some are claiming early Europeans were ‘black’. This is misleading as they were likely dark skinned but genetically Caucasoid. This shouldnt be a surprise as dark skinned Caucasoids are common enough, much of the population of the Indian subcontinent for instance.

It isn’t the exact same ethnic group as those from Africa, but what I have read is that the skin coloring was pretty close. I’m sure there was plenty of variance, though.

Although personally I think the blue eyes part is the neatest part. I wonder if there were any other prominent eye colors. The scholarly journals I read on the subject tend to gloss over that part. =/

Is Caucasoid still used?
I though science was getting away from that since Europeans are not from the caucases (the etymology of the name).

Perhaps an interesting random encounter in the game would be a small Mesolithic hunter-gatherer group passing by. The player could interact with them, and trade. Maybe even the chance for exogamy.

He’s really neat.
I wish they would make an entire life sized diorama with a little Meolithic family.

Caucasoid is certainly used, and the origin of a name need not be valid to be applicable, it’s a name not a definition.
As or the ‘-oid’ suffix, that is just a cultural sidestep. Caucasian is a perfectly valid alternate of itself, but when classifying people groups it helps to use -oid in general to avoid offense, as its more clearly a scientific distinction rather than a racial slur.

I don’t know if Europeans would be pale skinned by the time of your novels. 5k BC, I cant see why not. Very likely by the timeline of the game though.

While pale skin is a positive evolutionary trait for temperate regions, dark skin is common in arctic communities because of higher UV light. Cheddar man may have lived in Ice Age conditions, which would also encourage darker skin tones.

They are not pale skinned in the novels. I have trouble getting artists to draw them dark enough.
Artists always argue this with me.

The woman from Britain is late Mesolithic (MtDNA U5b1a) and she is much darker than the woman from Germany, early LBK Neolithic (yDNA I1).

I just steer clear of Caucasian as a term.
I am labeled “Caucasian,” though my ancestry has zero to do with the caucuses.
There are actual people from that place who probably should have that title, and not me. (I have some of their rugs, too lol Very beautiful work!!!)

As far as I know from my lectures on that topic, mesolithic Europeans (western hunter gatherers) were nearly 100% dark skinned and blue eyed. The eastern hunter gatherers, however, seemed to have very light skin and dark eyes. They both groups mixed in Skandinavia and Eastern Europe. The first farmers were immigrants from Anatolia, apparently lighter skinned as well, I assume, which mixed with the mesolithic population, although contributing most of the genetics, Apparently, Corsican genetics didn’t change since that time, so that’s what your typical Neolithic person would look like (Basques are pretty close, too). I think the developers come pretty close in the released graphics.

But their was one big genetic shift yet ahead, and that was the Yamna migrations about 3000 BC which originsated from the steppes. At that time, cattle herding nomads immigrated to Europe in huge numbers, a fact which wasn’t accepted in Archeology until 2015, when it was prooved by Archeogenetics. There is now a huge body of evidence pointing at these people being the first speakers of Indo-European entering central and western Europe, so nearly all European languages spoken today diverged at that time. They were related to the Eastern hunter gatherers mentioned above, had very light skin and were quite tall, About 20% of them were lactose tolerant, which is the highest percentage in Europe at that time (sensible in a herding community). Last but not least, they brought the plague to Europe.

The spread of these various groups can be witnessed by looking at the haplogroups of modern-day people, as well as the haplogroups of genetic material found from the past. The link below is to a site that has probably the most expensive information on this topic I’ve ever found. It’s more complex than just two major migration of his butt, I believe those are both detailed. Many of the groups that we’re in place during the early Neolithic we’re simply displaced.

For example, the i1 haplogroup reasonably common in the early linear Pottery culture ended up moving into Scandinavia in modern days.

Origins and history of European Y-DNA and mtDNA haplogroups

Origins, diffusion, history, ethnic association of European y-chromosomal (Y-DNA) and mitochondrial (mtDNA) haplogroups and their subclades, with geographic distribution maps for each haplogroup.