Is there any effort/plans to overhaul the UI/UX

I really want to like this game, but currently the gameplay mechanics are confusing and obscured behind a very unintuitive UI design. I left have left the game alone since after launch it was too unplayable for me at that point and not fun at all. I have come back for a retry now and I notice that the world info at the top of the screen has been reworked since I last played it.

However I still find the game pretty much unplayable due to the gameplay UI/UX.

After all the work put in by the developers on the engine and backend of this game it would be a shame to see it flop and fail, over something as basic as UI discoverability.

Is there any effort to rework this (either from the community or the devs) that I could contribute to ?

Has anyone (devs?) published any kind of high level stucture of the game’s mechanics/menus/states ?

As another backer of the game, this is not the final UI. It is clear that key information is not available to the player and that some key concepts are not well explained in game. Quittix3 has posted a couple of suggested interfaces and the developers do seem to be actively reading these forums and engaging with the discussion, so constructive contribution would be welcome.

How the user interfaces with functions and information in the game should have been considered as part of the design process for the gameplay, and that it wasn’t given its proper attention by the developers is a massive red flag for me at this point. IMO it needs a complete rethink based on some kind of design info from the game and dev’s roadmap.

I would be up for helping a bit, but I don’t want to waste any time with it falling on deaf ears.

@Quittix3 what has your experience been with trying to help with the UI ?

This is a mockup not the final UI. Remember that this is a work in progress game not the final game. We review every suggestion in these forums in our daily meeting.

How the user interfaces with functions and information in the game should have been considered as part of the design process for the gameplay, and that it wasn’t given its proper attention by the developers is a massive red flag for me at this point.

I disagree that it has not been considered. What is there is the current iteration, and game design is a process of iteration, which the developers have stated is a temporary solution. Aspects develop in tandem and player feedback, on the alpha product, will help create the best solution. The developers are certainly not deaf to feedback and the swift introduction of the small fireplace is a great example of how they have listened to backers.

The developers have said elsewhere that the UI is a work in progress and is subject to improvement. It seems as though they are going to squeeze in UI/UX improvements while working on/releasing major features.

I would say that it could possibly change quite a bit before final release; considering how many people have given negative feedback regarding the current state of the UI/UX.

I’ve found that the developers are very open to suggestions and opinions. They will reply back to private message or on the forum as long as you have something good/constructive to discuss.

I try to help as much as I can with bug reports and suggestions, as well as on the Steam forum where I will try to assist others as much as possible.

Though I have found that the developers prefer to work among themselves, without interference from the outside. I’m not saying that’s necessarily bad or wrong of them. Some developers are very open about the issues they are having in the programming process, etc and some aren’t. If the UncasualGames team works best this way, then that’s ok - whatever works best for them is the way to go.

We love to read every suggestion and we are open to discuss any idea about any game aspect. Now with the public roadmap we will be able to focus comments and suggestions.

@desol The main reason I’ve been attempting to help as much as I can is because helping players and communicating info to the community can be time consuming.

How’s it looking? [Final Redone Side] [Final Redone Bottom] Changes/suggestions included: New consistent style between tribe menu & toolbars X-Ray toggle button added to toolbar, no more holding a key down Tribe portraits and item pictograms resized Expanding menu - Tribe menu will only use the space that it needs Buildings menu removed and merged with Summary menu Collapsible menu sections - Collapse sections of the the menu that you don’t want to see Build button and …

@Lang the clue in amount of consideration is “temporary”

@UncasualGames - have you considered a user survey or signing some eager users up forsome A/B testing.

One idea I had for improving the UI involves seperating the workgroups and tribe flag out of the main left panel and into shortcuts, along one side of the screen. This is based on the assumption that the tribe and workgroups are base/essential gameplay elements and something which won’t change through the ages?

Is there currently a wiki with any information on the game ?

Or any info on the game structure in terms of hierarchy?

have you considered a user survey or signing some eager users up forsome A/B testing.

This is currently reserved for backers with beta access reward. But we could open it for selected testers.

had for improving the UI involves seperating the workgroups and tribe flag out of the main left panel and into shortcuts, along one side of the screen.

This is based on the assumption that the tribe and workgroups are base/essential gameplay elements and something which won’t change through the ages?

We plan to change the group categories in different eras.

Is there currently a wiki with any information on the game ?

We have planned some kind of reference section or maybe a forum section.But not for public edition. We are open to suggestions about this.

One idea I had for improving the UI involves seperating the workgroups and tribe flag out of the main left panel and into shortcuts, along one side of the screen.

Almost my thoughts exactly, but I would leave the groups in the UI as it is in the main tribe menu. Just for the sake of changing as little as possible, while getting better functionality.

When you pick a group, it would basically just be a shortcut button that sends you to the main menu for that group.

A wiki players could contribute to would be helpful to share the knowledge and reduce the burden on you, the developers. I appreciate that this could result in misunderstanding leading to misinformation, but for the significant benefit in terms of basic functions, it would be welcome. Misinformation could be reviewed by the developers after a major release when key outputs have been delivered.

I am keen that the developers focus on developing. I would welcome them drawing on the experience and support of the community to help, where it is offered.

The wiki should be available to Steam purchasers also, to assist integrate that portion of the community. Better a strong community that making those who kickstarted or bought early are made to feel special.

@Lang Apparently you can make guides for the game on Steam. I was going to try that but I haven’t gotten around to it.

@desol Actually, what about shortcut keys on the keyboard that let you scroll through your groups?

I think visual cues would be necessary too. It would be great to assign keys, but it is then limiting the group numbers to a max of 10, given that the number keys are the only real non confusing choice for a dynamic selection (think pretty much all games have groups/hotbars bound to numbers)

It is important to stick close to generic ux/ui choices. like it or not users expect things to work a certain way and changing that is a surefire way to make the game inaccessible to a group of players who will quit when it behaves differently to what they are used to. It also has to consider completely new users and how they work out how to play the game. Yes people learn keyboard shortcuts as they go, but relying on them soley is not a good idea IMO.

Also it could show indicators on any shortcut icons, and even if workgroups are not a thing in later expansions, the same shortcut/icon slots could be re-used for other selection shortcuts.

It could even just show favourites along the shortcut bar!! giving users a way to get to their favourite groups, charaters or whatever else is to come.

Regarding the wiki/info - I am not sure steam guides are the best choice for info to help improve the game in early access. They are however great to help new users have a better idea how to play the game better.

In terms of UI though, I don’t think a guide should be essential to play the game past the tutorial, and the thing this UI is lacking more than anything is discoverability.

there is actually a wiki at https://ancientcities.gamepedia.com/Ancient_Cities_Wiki which is currently full of stubs. If the claimed, the community could start collecting data about all the game assets and mechanics which could be a valuable asset for new and advanced players.

OK so here is a look at the beginnings of my ideas on layout. 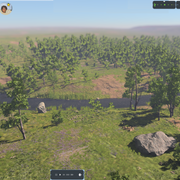 Thoughts/Critique/Improvements? (Please ignore the shoddy image editing it is the layout i am more concerned about, feel lucky its not just a wireframe

I will have a look at some more of the UI and functions when I have some more time and info.

Awesome! That now makes two of us pushing out design ideas for the developers.

The region map button will have a lot of functionality and use later in the game. It’s practically a core feature. So it seems rather natural to have it near the time controls up top. They are both huge parts of the game

I like what you’ve done with the groups in the top left corner of the screen. But I would have to argue that a list of groups already exists in the tribe menu, so you’re adding extra layers that don’t really add to the experience. I would say that the tribe menu as a whole neeeds to become more user friendly and aesthetically pleasing.

I like the idea of pushing the top toolbar to the side of the screen. What if you pushed it to the left, and then had a side toolbar on the left pushed up, so that they meet in the corner. Then the tribe or group flag would sit in that corner.