We continue to work in the load / save system which its now capable of keeping multiple saves.
We have been also working in the associated interfaces to load and save games and they are already nicely working. At some point we would like to add an associated screenshot to the save, to better recognise each one, but its not a priority right now. 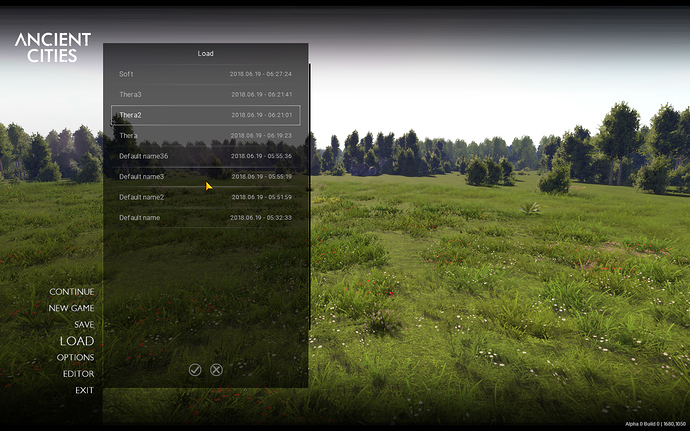 We have been thinking about limiting the saving options to the player, as we feel that allowing the user to save/load at any moment usually leads to save before taking any important decision, cheating and breaking the game difficulty and emotion.

One way to minimise this would be to allow only one save for game and saving automatically each x time and when exiting. This still allows to cheat, but at least it would require a bit of effort and can make the player not so prone to saving cheats.

Before deciding we would like to know your opinion. If you think cheating this way is a problem for game-play and you would like us to make it not so easy or if you prefer to be able to load and save at any time and have as many saves for one game at different stages as you want.

I would be really nice if you could decide this bevor the round starts, either you have the option of saving and loading as many times as you want or you could limit it and play it in an higher difficulty without the manually saving option.

Have like a hardcore or one life tickbox when starting a game, so if you want the extra challenge you can tick it and it will only keep 1 save, autosaving every x minutes and on exit.

Then you can still have the normal option for the more casual players to save whenever they want.

I agree with them both. Don’t forget that you’re catering to hardcore players who want an unforgiving surviving experience but also to city builder fans who want a management challenge but want to build the city as they intend too.

I agree with your idea that risk is increased when saving is limited, but I tend to enjoy saving before big risks and even trying different outcomes. Perhaps you could start the game selecting whether or not you want that ability.

Also, you were saying that you wanted to make a realism DLC which is beyond the games normal rating and allows us to actually play The Realistic Neolithic. One of the realistic components of that DLC might be a single game save that can only be used if the game has not been played past the save, meaning you only use it if you shut the game off. That means complete realism of cause and effect. If you want to play the real Neolithic with the full DLC and all of its grit and blood, then you play like a real caveman LOL

I agree with the people that already replied. Make like a, permadeath/ hardcore mode/ what ever you want to call it, checkbox when setting up the game so players can choose what they want. This way you are doing it right for everybody

Awesome that the saving is working nicely!
Keep up the good work!
And the updates

Basically, my opinion is the same as stated by lot of people before: an option before launching the game is the thing I’d prefer the most. Enjoying the same game may be different whether you’re tired after a long day of work or when you’re in a competitive mind the first week of some always-far-too-short vacation.

At some point we would like to add an associated screenshot to the save, to better recognise each one, but its not a priority right now.

I like the idea. However, this also means the screenshot should allow to quickly recognize the settlement, whatever the conditions.
Probably targeting one main building, always in the same direction (screenshot taken from the south, with the main building northwards for instance) and with a zoom off sufficient to see instantly what’s in the surrounding area.
Just so that we may instantly recognize “Oh yeah, that’s when I tried to erect my 2nd menhir… I definitively should have waited a bit to have more people up to the task!” 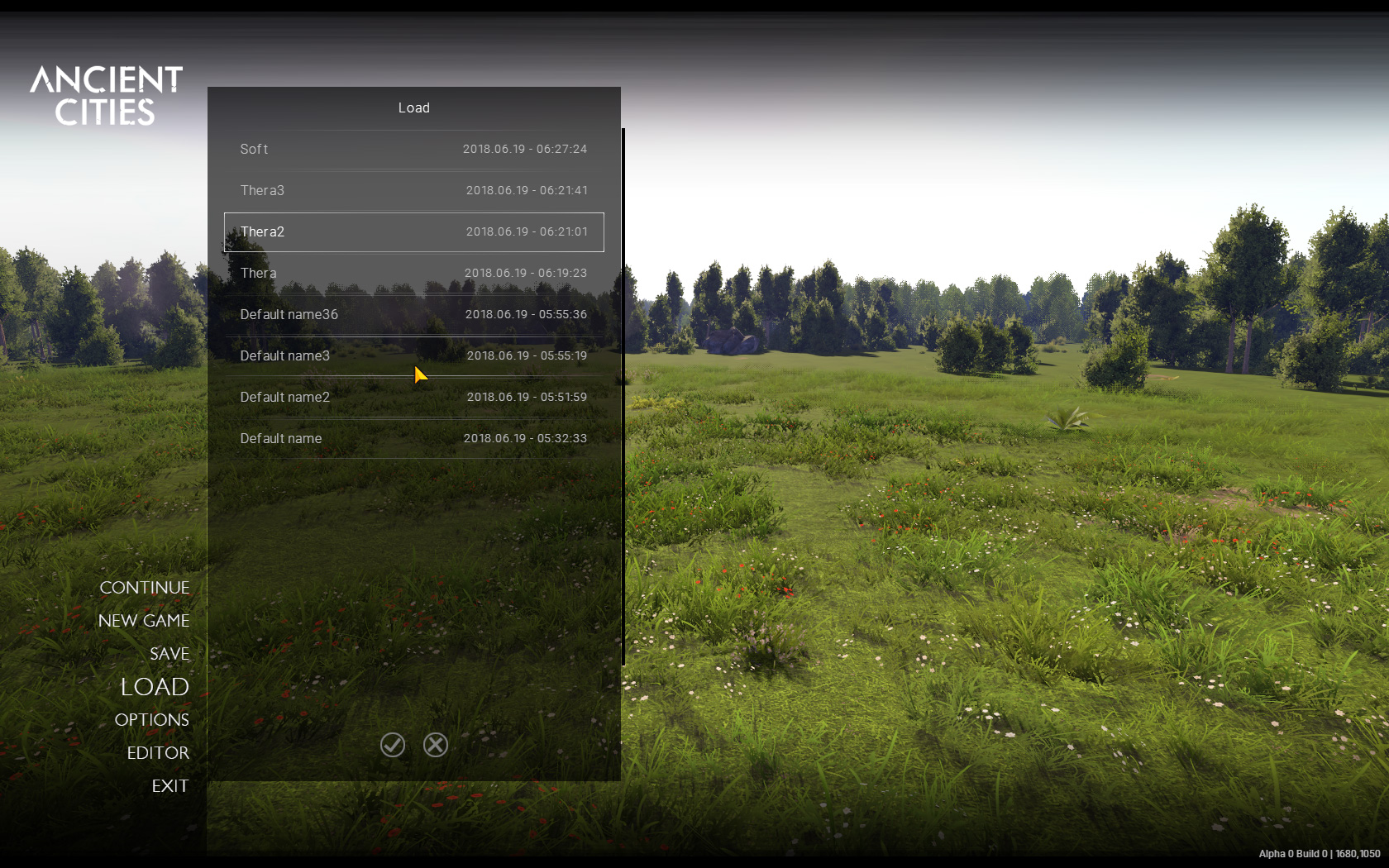 This landscape is truly wonderful!

Also, I love this sober interface. I remember you said elsewhere those were temporary work, but I came to associate A.C. with those plain white texts. Maybe it would be a good idea to have this interface for “technical” (options & settings) and the yellowish UI when in game?

Also, you were saying that you wanted to make a realism DLC which is beyond the games normal rating and allows us to actually play The Realistic Neolithic. One of the realistic components of that DLC might be a single game save that can only be used if the game has not been played past the save, meaning you only use it if you shut the game off. That means complete realism of cause and effect. If you want to play the real Neolithic with the full DLC and all of its grit and blood, then you play like a real caveman LOL

I totally understand your point of view, but I’m not sure I’d like that a lot. I’d prefer a very lot to play with the Realism DLC, but I definitively would not like it to be forcefully limited to one save only. In my sense, such an options that seems to be favored should appear as soon as the game is released, whatever the Realism DLC is used or not.

But as I know some people are achievement/trophy hunters, maybe having special ones for those using the hardcore mode would be a good idea?

It could be a switchable option, like combats and natural disasters:
1- Save always as you want
2- Save only automaticatly, every season for exemple

Thinking carefully about it, I believe I would prefer to always have a choice at least at the start of the game.

I just really hope they do the realism DLC. I hate when things are nerfed for silly rules. I know they have to adhere to them for their rating, but a DLC lets you get past this

I just really hope they do the realism DLC. I hate when things are nerfed for silly rules. I know they have to adhere to them for their rating, but a DLC lets you get past this

So do I. Definitively!

When you’re literally known for writing prehistoric fiction that is extra detailed, you can take a guess what your stance will be on realistic DLC LOL

Yeah I do hope the realism DLC will be a thing, but don’t want the hardcore/permadeath mode limited to the dlc only.

Give us the choice please

Completelly agree with the comments. Best way from my point of view should be to have the option.

You could take the Paradox approach and restart the game on save. Also like another user said you could make save anytime an option but you could also have an “iron man” mode that allows for achievements and only saves after x-time and on quit.

I understand what you would like to achieve with limits to the frequency of saving/loading but I don’t think it’s a good idea. While it can help players experience a sense of urgency associated with the risk of loosing something, it also makes the game less accessible.

Some people like to save a game to experiment but then still be albe to go back and play it “safe”. Sometimes it’s fun even destroying the entire city (think SimCity) just for the interesting scenes that will play out as unpredictable results of stupid decisions. Or maybe you’d like to create two “alternate history” versions of one settlement and compare the results of different decisions made in the very same game. “What if I’d expanded across the river instead of towards the hill?”.

There are people that dont have time to spend on recovering from fatal mistakes or start a new game. Perhaps they then sometimes miss out on the very point of what the game is about? Maybe, but why not let them decide that for themselves. If the game gets modding support it’s impossible to predict what the game might end up being for some players, and the option of saving/loading frequently could be very much appreciated in such scenarios.

Further, being able to save multiple savegames can be very important for people who experience random crashes due to for instance hardware issues or unstable power infrastructure.

I think what has been suggested above: with an option prior to starting a game to enable “hardcore” or “free saving mode” is the optimal way to go about this.

While I very much respect the fact that you, Uncasual Games, want to provide us with your intended experience, I don’t think that should come in the way of giving the players freedom to be part of creating their own. Engaging in your own story is a big part of what games are about, so I say leave it to the players themselves to decide on how they want to play.

Something like the „hardcore“ save game could be something for campaigns or similar. Imaging you set up a total hard to survive map. And than you share it and make something like a challenge of the month out of it. Who survives the longest wins

I am not a campaign player but maybe for other this would be fun.

Clear enough -and expected- your position about the save option. We take note

We have finally added an image to each save but only the image linked with the selected save is displayed.

Instead of a screenshot, which could be something irrelevant to identify the game, we decided to use the mini map with the current state of things. It will display the buildings and work areas, so its meaningful and the city will be recognizable. Also selecting different chronological saves will show how the city was growing on each save. 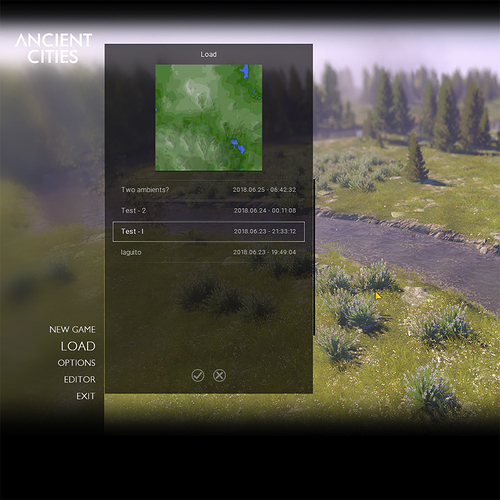 It will look better when we update the mini map design to something nicer than it is now.