Cant wait to be able to build ancient Jericho myself! 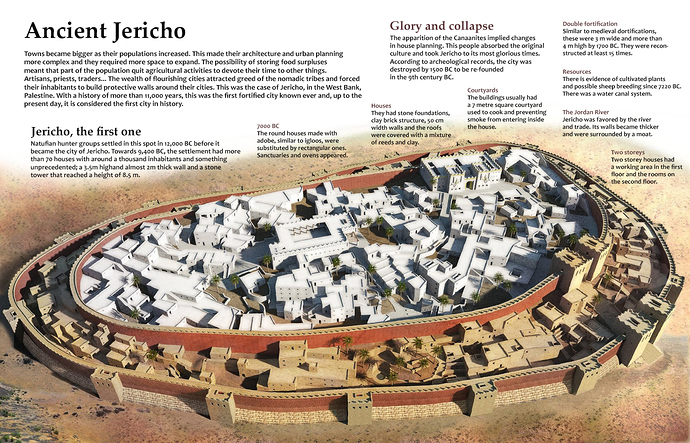 I found out, to my horror, that between ~5000-6000 BCE the city was abandoned!
Why it had to be at that specific time is beyond me, but it was a pain.
Back then, they had a small stone wall and a little tower, too! (Much more primitive that the pic).
Wonder why they moved out?

I think in this ilustration/recreation pic Jericho is portrait in its peak before it was burned to the ground.

Yeah, that’s way later than the Neolithic.
It would likely have looked a little more like Catalhoyuk in the Neolithic. Also, similar looking people, clothing and culture (though not the same). 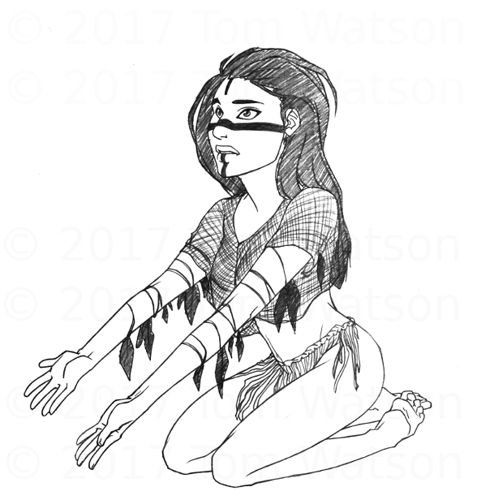 This illustration depicts a priestess from Catalhoyuk (note the vulture feathers and flax skirt). She would likely be VERY similar to a similar person from Jericho, circa 5500BCE. She wears a linen netted shawl for comfort (and illustrated modesty to conform to our societies silly standards).

Yeah you are probably going to have to wait for the Middle East Bronze Age DLC to rebuild that.

Lotus I believe around 6,000 BC Europe was hit by a rather severe bout of climate change. If you like I can look up the exact dates for you tomorrow, but it seems to have had quite an effect in the steppe, could it be that this climactic disturbance may have been the cause for the abandonment of Jericho?

Maybe. If you have any good references on that, please post! \o/
Climate change like that is the basis for my current writing, and additional references are always of use. \o/

aaah @lotus253 I’m afraid I owe you an apology, I got confused between my BP and BC. I’ll quote the passage I was thinking of when I referenced climate change:
“Around 4200-4100 BCE the climate began to shift, an event called the Piora Oscillation in the studies of the Swiss Alpine Glaciers […] According to these sources, extremely cold years happened first in 4120 and 4040 BCE. They where the Harbingers of a 140-year long, bitterly cold period lasting from 3960 to 3821 BCE, with temperatures colder than at any time in the previous two thousand years. Investigations led by Douglass Bailey in the lower Danube showed that floods occurred more frequently and erosion degraded the riverine floodplains where crops were grown. Agriculture in the lower Danube shifted to more cold-tolerant rye in some settlements. Quickly these and perhaps othere stresses accumulated to create an enormous crisis.” David Anthony, The Horse the Wheel and Language, 2007, Princeton P. 227

lol No worries. Many minor warm and cold fluxes are recorded occurring through time, and several of them are the focus of my current writing. I think you might of been speaking also about a much greater event than just a minor change in temperature lasting a few years.

Yeah, the book I’m reading essentially assigns the collapse of the Neolithic (note the Author uses the Eastern definition of Neolithic not ours) Civilization in the Balkans and Lower Danube in part on that cold snap.

Weather changes make wonderful plot devices in prehistoric fiction. I would hope long term climate changes would be used in the game, as well. It would be neat to have the climate change very slowly, over all, as well as random weather during game play!

It would be an additional challenge to be sure, this might be a question for a seperate thread but what will the time scale of the game be? The devs seem to want each year to be a slight challenge to survive the winter… if that’s the case we surely won’t be playing a game that will actually last 100’s or 1,000’s of years?

Devs mentioned that there will be button where you can fast forward few cycles, maybe even years.

Devs mentioned that there will be button where you can fast forward few cycles, maybe even years.

You can change time speed, not fast forward.

I hate to say this but no… not even close! Jericho was inhabited by western Semitic peoples who looked and spoke more like Amorites and Eblaites than anything like the Hurrians of Anatolia. Not to mention, Catalhoyuk was an underground city as opposed to an above ground one like at Jericho.

I believe that Jericho was abandoned early on like that due to climate change and drought from what I have read, although that is still just speculation.

I am specifically speaking of 5500BCE, not later.
Are you referring to a later date?

I’m not sure if underground is a term or literal. Both cities were above ground. Both cities were composed, at that time, of mudbrick buildings built close to, on top of or touching one another. In fact, catalhoyuk name means forked Mound. Jericho had the benefit of a small wall, eventually to be replaced by a larger wall, as well as a small Tower. Unfortunately, at the exact time that I mentioned, it appears that Jericho had been abandoned temporarily.

The reason that much of their culture would have seen similar was because, given the limited means and similar available resources, variation would have been limited mostly to artistic components. This of course is seen in the artifacts found at both locations. As for physical aesthetic similarity, they are not the same people but they are related people’s, at that time.

I apologize for being ambiguous, but to answer what I meant by underground, I meant that the layouts of these cities were vastly different in that Catalhoyuk was a messy, rooftop-like city on-top of which its inhabitants traveled. Almost as if it was underground due to the lack of streets or any sense of city planning.

Jericho, from what I gather, was founded by a completely different group of individuals who, due to their geographical location, would develop into the western Semitic peoples of Ebla, Mari, the Amorites and their ancestors. As another point of reference, the early buildings were clay-straw construction unlike the mud-brick buildings of Catalhoyuk. Regardless, I was just baffled that you claimed that they were similar at all.

But, after rereading your post, I think that I should do some more research on Jericho at that time period as I’m more acquainted with its early years, not ca. 5500 bc… of all times. I’m no historian and you could very well be right. I just don’t see any archeological, cultural, political, geographic, or socio-economic reason that they would be similar what so ever.

One of the biggest problems with Jericho is how many times it changed over the years. The wall has been replaced many times and most of the focus on Jericho comes from the biblical times, which I have zero interest in.

well, I’ll defer to you if you’ve put in that much research. However, if you have any sources that are relevant to our conversation then I’d love to read them.

Lotus I believe around 6,000 BC Europe was hit by a rather severe bout of climate change. If you like I can look up the exact dates for you tomorrow, but it seems to have had quite an effect in the steppe, could it be that this climactic disturbance may have been the cause for the abandonment of Jericho?

You’re not far off. The “collapse” of Pre-Pottery Neolithic towns like Jericho is associated with the 8.2 k event.

Thanks for the information!

Well, that’s about a thousand years before my own writings take place. As you can see from the temperature chart near link, things had mostly settle down by 5500BCE