How will hunting work? It would be cool if big part of the tribe was going out hunting together and used the terrain to there advantige. Like throwing rocks from clifs onto cournerd animals. Very hard stuff to script but ive read that they found animal bones crushed from that eara.
Great game!

Wow over a year an no further comment - my hope is depending on the time frame in game - hunting, fishing and gathering would follow the respective era - i would think that early would be mostly flush and funnel - early early would be club, stone maul and crude fire hardened spears (the 2 hand thrusting kind, not the throwing) - it would be interesting to see a system where by those types of hunting slowly progress’s your hunting knowledge, with a chance for a spark of inspiration, to move forward to bone tipping, flinting (if knapping is known - and that knowledge could apply to the quality of tools produced) and so on.

The game stars in Neolithic time, that means that the player will be not starting with zero knowledge. Restriction to clubs and crude fire hardened wood spears are a thing of the past. The game starts already in advanced stone age, so the main hunting tools will be spears with fine stone points, throwers and finally bows.

We would like to have mayor herds crossing the local map occasionally, but we are not sure if this will be ready for the release.

they found animal bones crushed from that eara.

This doesn’t means that they hunted throwing stones, that would have been very difficult as a general rule.
What they did was to break bones to eat bone marrow because its nutritional properties.
In Paleolithic times, before the game first release time scope, it seems that brains were also a very appreciated part judging by the number of broken skulls found in hunting spots.

I would suspect alot of that was a combination of food resource as well as tanning materials (lecithin) for the hides on larger game.

The Neolithic hunter was quite advanced. They would have access to a multitude of weapons:

Tips would be made from chert, flint, obsidian or generally sharp stones. No metal.

Not, early Neolithic would be closer to mesolithic hunter/gatherer, but somewhat agrarian.

Depiction of a Megaloceros hunt in Upper Paleolithic Europe by Ramon Acedo on...


These groups of men killing megafona are long gone by the Neolithic. Sure, it could happen, but it would be uncommon and certainly not with a crude spear. Neolithic bows and arrows are quite advanced. 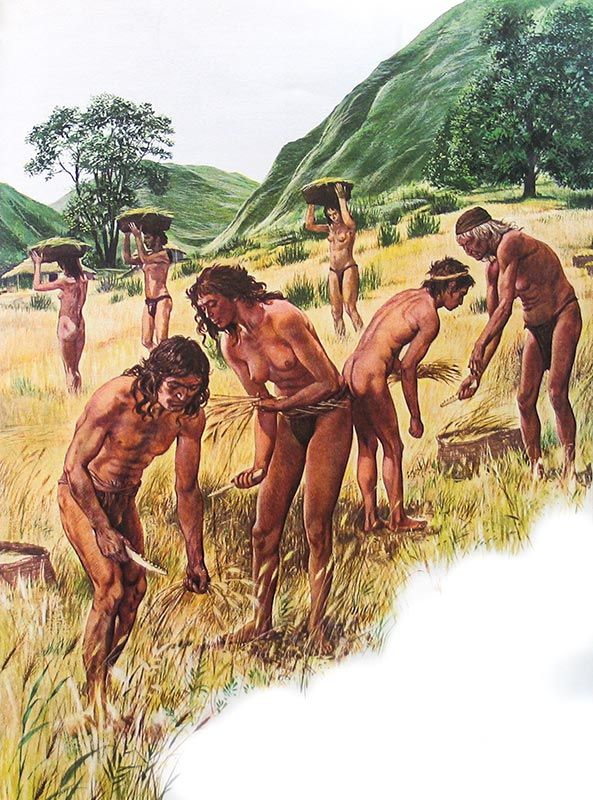 
People working to harvest crops in the field. This is the halmark of the Neoltihic.

Men from the pile dwelling settlement of Kehrsiten with fishing nets by Emil...

This Pin was discovered by Trey Hudson. Discover (and save!) your own Pins on Pinterest.

In the case of Large game, once the Ice Age expansion is added i would hope would look akin to the Alpha 2018 Bison hunt, leopard crawl range engagement, and bluff flushing. Weapons were mainly for defensive and to take down the odd straggler. The bulk of the kill was done by flushing them over a blind cliff.