Entertainment for your people

Any thoughts so far into entertainment for your people? Religious ceremonies, celebrations for advancements or war victories, games children play, the developing of legends and traditions, etc…

Ex: Would be cool to see a sporting event develop in the army like an archery contest.

Lots of potential here for cool extras to the game I think, would love to hear any other ideas.

For the non-military parts, dancing and wrestling, as well as contests.

[without culture and art, what are your warriors fighting for?]

Large feasts with dancing, simple music and singing would be useful. It does appear that music, dancing and entertainment were of importance in Neolithic society. An example, note the dancing hunters scene found in Çatalhöyük.

A little later than the Neolithic, the famous Mohenjo-daro bronze statue of a dancer girl shows us that dance was important. 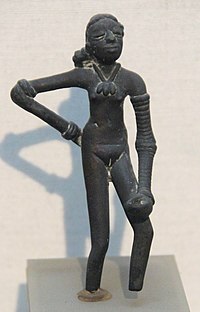 Dancing Girl is a prehistoric bronze sculpture made in lost-wax casting about c. 2300-1750 BCE in the Indus Valley Civilisation city of Mohenjo-daro (in modern-day Pakistan), which was one of the earliest cities. The statue is 10.5 centimetres (4.1 in) tall, and depicts a naked young woman or girl with stylized proportions standing in a confident, naturalistic pose. Dancing Girl is well-regarded as a work of art, and is a cultural artefact of the Indus Valley Civilisation. The statuette was di Th...

For the military part: I don´t think you will have an “army” in this game… The guys fighting for you will be your all day citizens just picking up a weapon

An addition to lotus253: There are some interesting theories about the hendges (not Stonehendge but most of the others), that these may have been some early type of arenas or at least something similar to it.

True!
When depicting “military” events, I spent a lot of time digging through journal papers and found little published evidence for “armies” as we think of them now.

Supposition: A village of 250 people has perhaps 1-5 “warriors” (people who are able to dedicate themselves or martial pursuits. The remaining “warrior” are just the villagers. This would make inter-tribal warfare very dangerous as a destabilization factor in a village. An unsuccessful raid would literally damage your own villages’s ability to make food, an opportunity cost.

As I recall (sorry, cannot remember the source so call it supposition lol) there is debate over just how deadly most early warfare was. In effect, I have heard it argued that “battles” could have been somewhat ritualized in some cases. It’s been ten years since I researched that specific topic… sorry for weasel words.

As for the dance areas, neat! I hope that turns out to be well supported as I am more interested in the cultural arts of the time than the battles.

I very much hope some rituals, celebrations, etc are added to the game, not just battles battles and more battles.

I also hope some form of primitive music is in the game as there is evidence of early musical behaviour around the time period.
This article quickly covers a few examples Instruments Of Prehistory

That would be really great!
They could play such music when the villagers have ceremonies or gatherings.

U, early musical instruments! Bone flutes arguably go back all the way to Neanderthals, one was found close to where I am from The Divje Babe Flute is a cave bear femur pierced by spaced holes that was found in 1995 at the Divje Babe archeological park located near Cerkno in northwestern Slovenia. It has been suggested that it was made by Neanderthals as a form of musical instrument, its hole spacing and alignment leading to its being labeled a "Neanderthal flute." Slovenian archeologist Mitja Brodar, however, argues that it was made by Cro-Magnons as an element of Central European Aurignacian culture. Despite alterna Di...

That particular one is debatable, but the Aurignacian specimens from several German sites (Hohle Fels, Geissenklösterle) and later Upper Palaeolithic sites across Europe are much more convincingly human-made - and importantly, the right shape for a flute. There are also numerous proposed phalangeal whistles, raspers, “bullroarers” and proposed “osteophones” (boney xylophones).

Thanks! Indeed, I used ‘arguably’, but mentioned it for local promotion

The unabiguous evidence cases are more interesting for the game. (Irrelevant, but as a refutation of the first, the paper you quoted - I like it! - is much too unequivocally sure; based on everything I read, the two sides of the debate reached a stalemate, with arguments both pro and con. But I don’t really have a stake in it.)

With most Native American tribes, in battle, it was a challenge to run up to your enemy and touch them and make sure you had a witness to prove you were a great warrior if I remember correctly.

I do belive there is several archelogical finds of bone pipes (instruments) and things that COULD be basic drums. So basic rythmic music should defenatly be part of the entertainment/religious events.

I’d support that supposition. A dedicated military caste requires a society to have a surplus to feed, clothe and equip that caste. So it’s unlikely that in a subsistence economy (be it hunter-gathering, farming, or pastoral) there would be “soldiers” in the modern sense of the word. In fact if we look a little later in history we see that professional armies are often the exception rather than the rule: For a long time Greek Hoplites and Roman Legionaries where citizen soldiers, mostly farmers, who in times of war dropped their plows and picked up their swords.

My current reading list surmises that a lot of battles and wars might have been things that just escalated and spiraled out of control. A few young men try to steal some cattle from another group. Someone gets killed during the theft. The aggrieved side swears revenge. They raid back, this time out for blood. This triggers a retaliation. Blood feuds of that sort have been known to go on for generations in historical eras.

What I feel needs to be added celebration wise definitely is the ability to hold feasts. In a time before money, before metal, and with few luxury goods, conspicuous consumption is a great way to display wealth and power, and it’s a good way to keep the neighborhood on good terms as well

Like the critique but don’t you think that’s something for the mods to decide and not you?