I have a question: will be possible to have the villagers build boats? Assuming the village in question is close to a river or a body of water. This could prove useful both for fishing and for trade although I don’t know precisely when the first ones were built

Many types of boats existed during the Neolithic and their use would be commonplace.
Reed boats and dugout boats would be the most common in most places.

Also, a boat should be resource intensive to make in the game.

I would imagine the good old mark 1 log was the first " boat" then onwards to hollowed logs, wicker coracles, rush boats, early planked boats etc… I guess that means boats can be a very early technology, all that is required to make a log is an axe of some description and the will to use it.

well yes, the more advanced boats should definitely be intensive to construct, but a basic reed boat shouldn’t be too hard i would have thought

You’re quite correct. Sorry, my brain was fixated on dugout boats.

Cool, I’d be interested to hear how this area is planned to be implemented in the game.

great idea, Seems fun if that is possible too

Yes! This would be awesome for travel, trade, etc. And since we have a ice age expansion they could use it for deep sea fishing like they really did back then.

Probably didn’t even need an axe for the first “boat”. I would like to think that someone wanted to cross a deep river, noticed that fallen tree’s seemed to float if they fell into the river and thought, let’s see if it will take my weight and the rest as they say, is history

Is there going to be any kind of raft or canoe in AC?

Very good idea, especially in the case of fishing or, why not, trade with other tribes 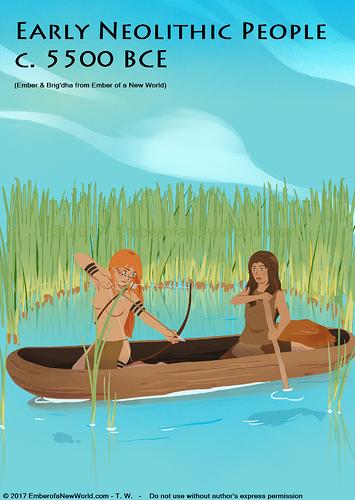 Fishing, trade, gathering, ceremonies, travel…
Boats are very important in the Neolithic, for sure!

After a quick read of 1994 M. Almagro-Gorbea’s Prehistory of navigation and the atlantic world, he considers navigation to be possibly traced all the way back to the colonization of the australian continent, around 40.000 B.C. (p. 15)
Although, considering Europe, Sicily’s colonization dates back to 100.000 B.C. and he says it can hardly be considered as “navigation” (don’t ask me why) (p. 14), so he states “real” navigation commenced around 6.500 B.C. with the colonization of various mediterranean islands. The appearance of an advanced type of ceramics around the Mediterranean is a cultural phenomenon which supposes the evolution of navigation techniques. In my opinion, if people crossed small straits by 100.000 B.C. they should’ve had some practice of navigating on fresh water.
You may have noticed I haven’t used the term sailing at any moment, because the sail wasn’t invented until around 4.000 B.C. in Mesopotamia (p. 16), so quite far of Ancient Citie’s gameplay setting. So hollowed logs and rafts (with no evidence of strong roping though) would be the only way to go here (according to Almagro-Gorbea’s work). He also states the reinforcment of those logs with planks and other materials is characteristic of the Bronze Age, so that would be set aside as well. This may seem limiting, but one of those logs found near Briggs could carry 30 people (p. 16) (which is a freaking lot if you ask me. Other logs found in France mesured from 4m to 9m). Dugout boats required a special type of old wood, preserved in a wet environment which was dug into and solidified with fire.

TL;DR
According to (only) one historian, navigation in Ancient Cities would be certain on fresh water, to cross rivers, to trade, or simply travel. I guess it could exist no problem on the sea to fish, but actually travelling by sea would require a much more sophisticated set up. The vessels would be primitive rafts and not so primitive dugout boats (techniques could be quite advanced for those).

Very interesting, thanks a lot.

Sicily’s colonization dates back to 100.000 B.C. and he says it can hardly be considered as “navigation” (don’t ask me why) (p. 14), so he states “real” navigation to commence around 6.500 B.C. with the colonization of various mediterranean islands.

I guess that means it’s “only” short sea travel along the coasts, or when seeing your final destination when leaving your depart point.
In French and English there’s the word “cabotage”, but it seems its meaning is quite different depending of who uses this word. So let’s call it “coastal navigation” – basically what was the most common outside of closed seas until the Modern Era.

It makes sense when you consider the risks of taking such a tiny boat, such as a wooden dugout, across a vast waterway with no known end destination. Think of how frightening that would be for the sailor. From their perspective, the water may simply go on forever.